The major accomplishment to date in 2018 has been the award of a contract for the performance of the cleanup work. The United States Army Corps of Engineers (USACE), working for EPA, awarded a contract to Environmental Quality Management, Inc. The EQM team has substantial expertise in mine closure design and remediation. The initial phase of the work includes activities to stabilize and grade the tailings impoundment in preparation for the installation of the cover system. Other activities that will be performed include periodic maintenance of the horizontal drain installed in 2015 to drain water from the tailing pile, flow measurements, water level measurements, and water quality sampling of the horizontal drain, bioreactor, and groundwater.

EQM will be developing detailed plans for the work to be performed over the next several months. As part of the development of the plans, there will also be an evaluation to determine how much of the existing rock at the Site that was left behind after mining activities could be used in place to reduce or eliminate the need for blasting to produce the needed rock. In addition, the following activities will take place in 2018:

2019 Plan: Looking ahead to 2019, EPA anticipates the following activities:

The Callahan Mine Superfund Site is located in the Town of Brooksville, Hancock County, Maine. The Site is the former location of a zinc/copper open-pit mine. The mining operations were conducted adjacent to and beneath Goose Pond, a tidal estuary.

The major mining operations occurred from 1968-1972, although there were some limited mining activities from 1881 to 1887. For the open-pit mining operation, two dams were constructed at the saltwater inlet and freshwater inlet of Goose Pond. Fresh water that normally flowed into Goose Pond was diverted south to Weir Cove via a drainage ditch. Goose Pond was subsequently drained to allow for the excavation of the mine. After the mining operations ended in 1972, the dam at Goose Falls was opened, flooding the mine site. The ore contained zinc, copper, lead, and trace silver along with cadmium and arsenic. Figure 1 shows the operational areas for the Callahan Mine during operation. The Site includes the following areas:

The Site was listed on the National Priorities List (“NPL”) on September 5, 2002. EPA began the Remedial Investigation and Feasibility (“RI/FS”) for the Site in 2004, although some preliminary RI/FS activities began in 2003. In June 2005, the Maine Department of Transportation (“MaineDOT”) took over the RI/FS pursuant to an Administrative Order on Consent (“AOC”) between EPA and the State.

Based on the September 2009 EPA Record of Decision for Operable Unit 1 (“OU1”) and September 2013 Explanation of Significant Differences (“2013 ESD”), EPA is implementing the cleanup for the Callahan Mine in three distinct phases.

Cleanup of the arsenic, lead, and thallium contamination in several residential properties along with the cleanup of the PCB contamination in the former Mine Operations Area. As part of the Phase 1 actions, the waste rock and remnant ore at the Ore Pad was removed and placed on the Tailings Impoundment. The Phase 1 (Operable Unit 1) cleanup actions were completed in 2013.

Study of the groundwater contamination and waste rock outside the major waste areas. This component of the cleanup is still in the investigation phase. 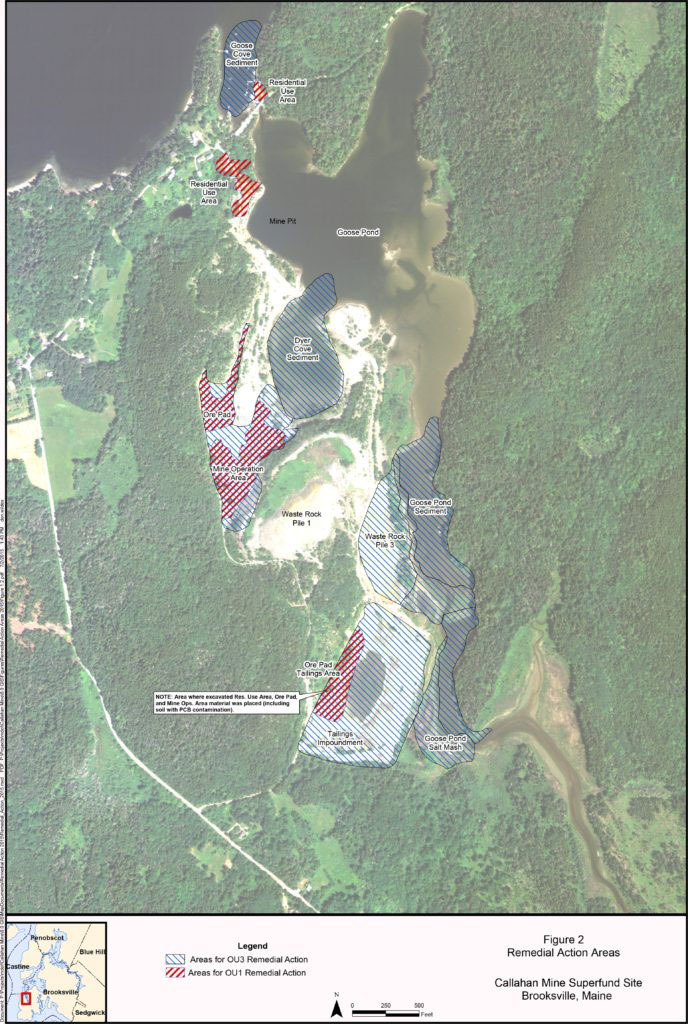 More information about the Callahan Mine Superfund Site can be found at the EPA website: www.epa.gov/superfund/callahan.